Illinois State Representative Larry Walsh, Jr. is attempting to give some power back to the people with House Bill 5727, the Muni-Annex Backdoor Referendum, which he introduced last month (we wrote about this in our News blog when it first came out). The bill sought to allow residents to petition a referendum on decisions made by governing authorities regarding annexed land. The bill would give citizens the power to potentially overturn decisions made by local government if they had the right numbers (in the original HB5727, 10% of the voting population would be required to overturn the decision, and the referendum could be held any time up to two years after the annexation). Fearing the bill would stifle growth, politicians and representatives of local municipalities challenged Walsh, Jr. to revise the bill to make it more conducive to growth and development.

Recently, Walsh, Jr. did just that. The amended bill is now specific to within 5 miles of Midewin Tall Grass Prairie and its scope has been narrowed— the bill now requires 50% of the voting population, which would be a much more difficult feat than the 10% originally proposed. The amendment also included a reduction of the time period allowed to challenge the annexation; it was reduced to 30 days. Representative Walsh explained the bill and the amendment in an article published in the Chicago Tribune.

You can read the full text of Larry Walsh, Jr.’s HB 5727, as well as the amendment, on the House of Representative’s website.

Why This Bill Matters

This bill is incredibly helpful to our fight against NorthPoint Development as it would give local residents the ability to bring an approval of annexed land to a referendum. There has been overwhelming local opposition to NorthPoint Development’s proposed Compass Business Park industrial warehousing project, which would encompass 2,000+/- acres of unincorporated land adjacent to Midewin Tall Grass Prairie if approved. In order to move forward with the project, NorthPoint Development must request annexation into the Village of Elwood.

This bill would limit the local government’s power, and it would give residents the voice they deserve.

How to Support the Bill

You can show support of the bill by being a proponent and submitting a witness slip. A witness slip is something that individuals or groups can use to show their support or opposition to a piece of legislation. This can be done in just a few minutes online. You do not need to register a profile; however, if you do not, you will not be able to go back and edit/change your witness slip in the event that you made a mistake. If you’d like to register a profile, check out this user guide to learn how. So, be careful when submitting a witness slip to ensure that you are in fact supporting the bill and not hurting it.

Additionally, you can raise awareness about the bill by sharing this post with your friends and family, and urging them to complete witness slips as well. Visit our Facebook page to share on social media, or simply copy and past the URL of this post and email it to contacts that you think will support the bill.

How to Complete a Witness Slip

To complete a witness slip for the amended HB 5727, there are a few simple steps to follow.

First, you will need to visit the Witness Slip page for this Bill — but specifically for the amendment of this bill. Click this link to access the website to complete a witness slip for HB5727 HCA 1. The screen will look like this: 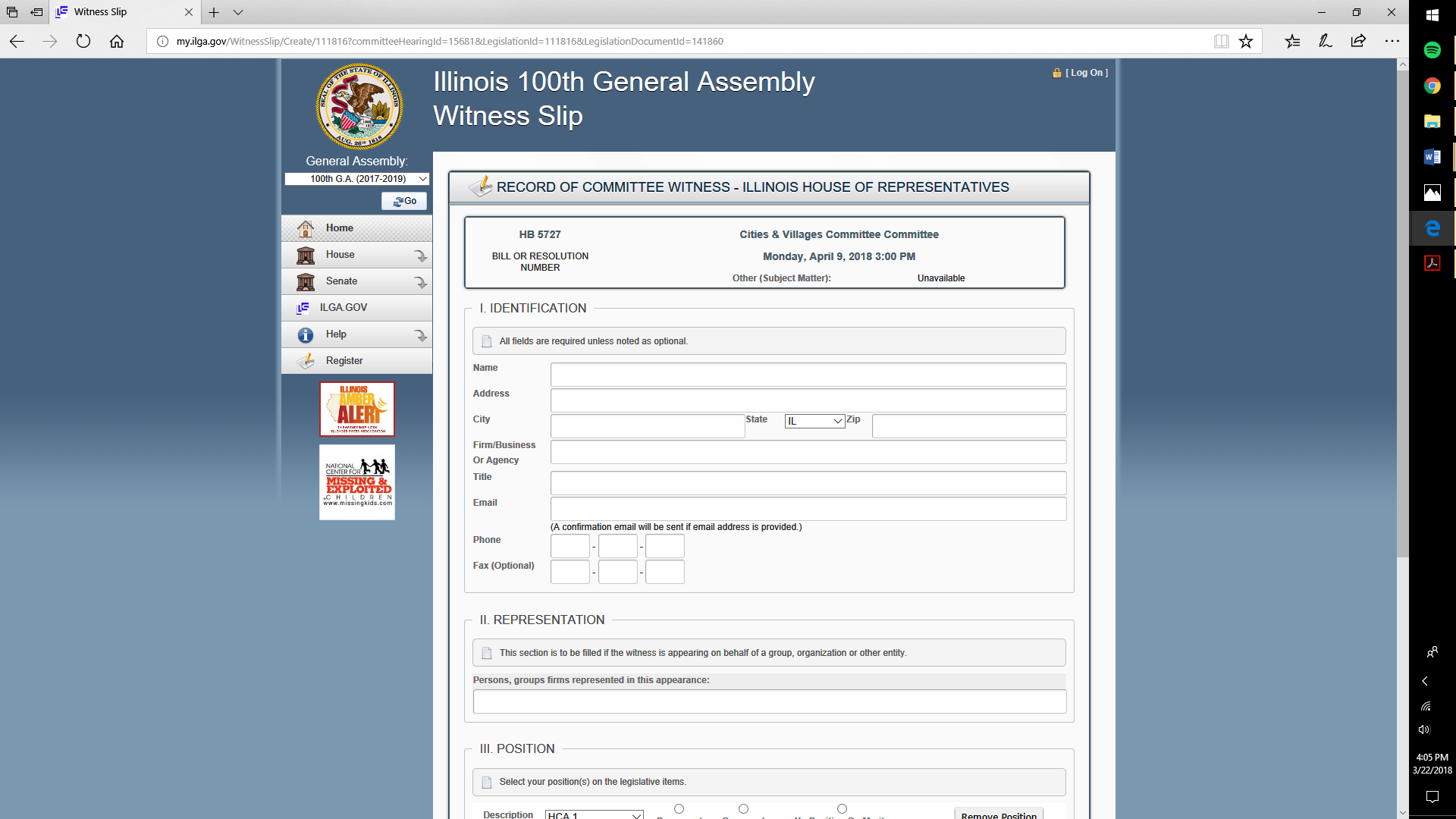 The next thing you will need to do is to fill out the form. You are required to fill in all parts of the form except for a Fax number.

Help! What Do I Put in the Form?

Complete the form by using your legal name and mailing address.

For Firm/Business or Agency,  as well as for Title, simply type “NA” or “none.” Either of these will work. Unless you are authorized to represent XYZ firm, business, or agency, do NOT name them. (For example, if you are a teacher, you would NOT put down that you represent a school district unless you have expressed consent to do so.) It is not necessary for you to write Just Say No to NorthPoint or No to NorthPoint — this bill, while it will help us, is NOT an anti-NorthPoint bill. Keep that in mind.

Persons, groups, firms, represented in this appearance — Simply write “Self” or “myself.”  Again, unless you have expressed consent to represent a group, simply name yourself.

The second part is critical – if you want to SUPPORT the bill, you need to select the bubble above the word PROPONENT.

If you want to oppose the BILL – meaning that you do not support it and do not want it to become a law , then select Opponent. However, remember – this is NOT whether or not you support or oppose NorthPoint. It’s about the BILL itself.

This part is also very important! The three options are outlined below. You will most likely want to select Record of Appearance Only unless you intend to submit a written statement or appear in Springfield at the hearing and give testimony.

RECORD OF APPEARANCE: You will likely see a lot of “Record of Appearance Only,” which means you simply want to register your support or opposition. The names of the proponents and opponents will be read at the hearing.

ORAL TESTIMONY: Only select ORAL if you want to go down to Springfield and you are interested in presenting oral testimony IN PERSON at the committee hearing.

WRITTEN STATEMENT: If you are unable to attend the hearing but would like to submit a written statement, click “Written Statement Filed.” NOTE: It is your responsibility to get a copy of your written statement to the chairman or chairwoman of that committee! For this bill, it is being heard before the Cities & Villages Committee, of which the chairperson is Representative Anthony DeLuca. You can email him a written statement: repdeluca@sbcglobal.net

PLEASE BE MINDFUL WHEN MAKING YOUR SELECTION! A couple of mistakes is not a big deal, but we don’t want them to get the impression people just signed it, had no idea or why they were signing it, and just did it.

Agree to the ILGA terms, click create slip, and you’re done! You should receive an email confirmation of your slip (check your SPAM folder if you don’t get one). Your name will also show on the list.

That’s all there is to it! So get out there and encourage your friends and family to support this bill to give citizens a voice!