The Public Hearing that was held December 19th was adjourned at 11:00 pm after a 3-hour presentation from NorthPoint Development and 1 hour of public comments by approximately 10 public speakers. The Village Hall was at capacity, with scores of people turned away. The Village of Elwood refused to shut down the meeting to reschedule at a more appropriate venue that could accommodate the large crowd. There were also no occupancy signs in the basement (a fire code violation) where people were assembled to watch the hearing on big screen TVs. People were housed in the meeting room, the overflow room, the basement, an extra area in the basement, and offices upstairs. The meeting was rescheduled to January 11th, 2018 at 7pm at the Village Hall. No location change has been posted. 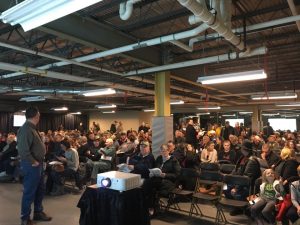 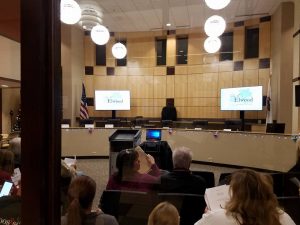 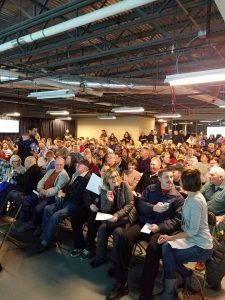 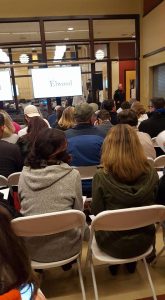 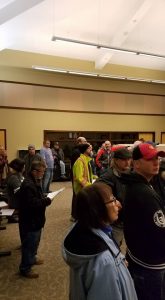 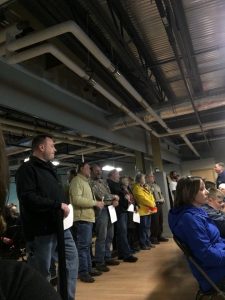 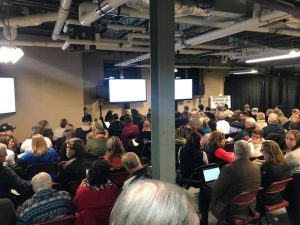 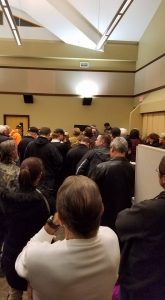 Scenes from inside the Elwood Village Hall, December 19th, 2017. 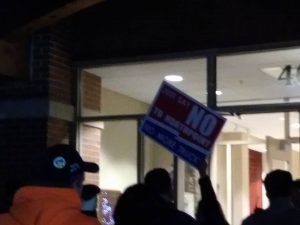 Crowds wait to get inside — many turned away— at the Elwood Village Hall for the Public Hearing of NorthPoint Development property, December 19th, 2017.

PUBLIC STRONGLY ENCOURAGED TO ATTEND AND VOICE YOUR OPPOSITION TO THE PROJECT DURING PUBLIC COMMENTS.

NORTHPOINT TO BRING 53,000 TRIPS AND 16,000 TRUCKS DAILY! ALL NEARBY INTERSECTIONS WOULD FAIL!

We have learned that multiple traffic studies have been done, potentially up to 4 completed. What we obtained in our FOIA request to IDOT contains both a Kimley Horn study excerpt (complete study is approximately 600 pages), which was commissioned by NorthPoint Development, and a Tran Systems study, which was requested by an unknown (at this time) source. To be clear, the Kimley Horn study does not show the numbers quoted— those are reflected in the Tran Systems study. The information is still the same, we just needed to correct and update the source of the information. We’ll keep you updated as we learn more!

NOTE: This traffic study was obtained by FOIA through the Illinois Department of Transportation. A FOIA request was submitted to the Village of Elwood, and only a portion of this traffic study was included. Excluded was everything after page 7. The full Kimley Horn study is approximately 600 pages.