Did NorthPoint say no to unions for its own “Yes to Union Jobs” signs? 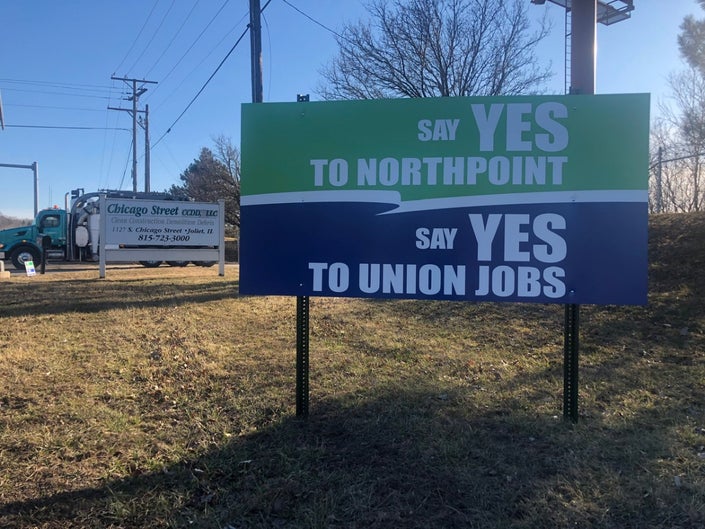 Local union members noticed that the NorthPoint’s “Say Yes to Union Jobs” signs did not have the union “bug” logo, signaling that NorthPoint actually said “no” to union jobs.

Photos and video taken Wednesday afternoon confirmed that at least three large signs and one small sign located outside Chicago Street CCDD, LLC, 1127 S. Chicago Street, Joliet, did not have the union bug. The bug would have been printed on the signs had they been printed in an a union shop, unless specifically requested otherwise.

Sources have confirmed the signs will be pulled down within the next 24 hours to replace them with signs with the actual union bug logo on them. It is unknown how many “Say Yes to NorthPoint Say Yes to Union Jobs” signs were created through non-union printer that remain in circulation.

“How embarrassing for Dirty Doc to have left off the union bug,” said Stephanie Irvine of the Say No to NorthPoint movement. “There is an excellent union print shop right in Joliet.”

These signs send yet another clear signal that NorthPoint’s interest is not about union jobs.

Just Say No to NorthPoint movement has brought to light a number of instances in where unions have clashed with NorthPoint Development after the Project Labor Agreement was signed.

In Burton, Michigan, in July of 2018, NorthPoint brought in union contractors from Kansas City. From the ABC article, “Our tax money is headed to St. Louis and we have an issue with that,” said
Michael Lynch, president of the Genesee Lapeer Shiawassee Building Trades Council.

“We’ve been building GM for over 150 years, so it’s our jobs leaving the state and our tax money going with them.”

We also reached out to Michigan’s GLS Building Trades President Michael Lynch to see if things ever got resolved. In an email dated February 14, 2020, Michael Lynch responded to a question asking whether he and the GLS Building Trades supported NorthPoint Development; the response: “No. No f-ing way.” When asked him if things ever got fixed after mentioning NorthPoint busing in non-local workers, he said:

“That is what they did on the GM Fusion plant and the job went into the dirt.” GLS Building Trades President, Michael Lynch, 2/20/2020

Join the No To NorthPoint movement. Attend a No to NorthPoint town hall either Thursday March 5 at Knights of Columbus Hall on Infantry Drive, Joliet; or Monday March 9 at Croatian Club on Clement. Both nights, the doors open at 6 pm with a presentation at 7 pm.

originally appearing as an opinion piece in The Patch