NorthPoint Development recently distributed a press release, wherein they claimed they’re ready to build. Typically, press releases are issued when there is something newsworthy to report. In this case, it really isn’t news that NorthPoint is — and has been — ready to build since first coming to the area. In fact, they claimed at a meeting in Elwood that they would be breaking ground in October of 2017. Ultimately, they aren’t any closer to building than they were then; they’ve only acquired more obstacles to jump and more lawsuits to fight.

What is news, however, is that NorthPoint decided to change their name to Compass Global Logistics Hub, hearkening the 2004 movie Dodgeball that features a similar underdog story and a similar villainous name (Globogym). While it is uncertain whether this name change will stick (their website still uses Compass Business Park and makes no mention of the new globo-endeavor), they must have felt strongly enough to publish a press release about it. So, it looks like that press release was newsworthy. Maybe?

Let’s get back to NorthPoint being ready to build. Nary a shovel has been tossed in the ground — not even after having marketed the 200 acres of industrial zoned property in Elwood for the past year. No one seems to be interested in it. Perhaps the reason is that the clearest route to access the intermodal and highway is a congested, worn down 8-10 mile path, and the bridge that they want to build to leech onto CenterPoint Intermodal, use their roads and access their highway, is still subject to a lawsuit. That lawsuit, between the Village of Elwood and LB Andersen (one of the many NorthPoint Development entities) isn’t due back in court until October 2020. And even after that, they would have to gain approval through the Illinois Commerce Commission, the entity that permanently closed that very same crossing in 2017. NorthPoint did open a case to get the intersection reopened and build their bridge, but that has been sitting dormant since 2018. But hey, they’re ready!

NorthPoint’s readiness to build is still a moot point; the pre-annexation agreement that the City of Joliet approved last spring requires a bridge, which as just explained, is still subject to a lengthy court battle. The agreement did have a caveat for a mysterious alternative location for a bridge (despite NorthPoint’s own Tom George declaring that there is no Plan B for the bridge), which NorthPoint would need if they lose the lawsuit with Elwood and they cannot build their bridge.

An alternative location is nothing short of a farce; first of all, NorthPoint is working with BNSF, whose terminal is at the southern end of CenterPoint intermodal. It wouldn’t make sense for NorthPoint to jump in bed with their competitor just to access the northern end of the intermodal, which is also miles away from the northernmost footprint of their property. It would put them in the same position they are in right now without the bridge.

But common sense is rare these days when fear is running rampant. That’s what developers like NorthPoint thrive on — that adversaries will get scared, think it’s a “done deal,” quit, and pack up and move if they don’t like it. Not much has changed since 2017 in that regard, though — the fight is just as strong as it was then. Residents still aren’t scared, aren’t giving up, and in fact, new groups are springing up threatening legal action, all while the development clock keeps on ticking.

But let’s suspend reality for a moment and say Mountain-Dew slurping Patrick Robinson was able to casanova his way into working with UP; surely, they haven’t taken into account the nitty gritty details of the recently signed Houbolt Bridge agreement between multiple units of government and their competitor, CenterPoint Properties. That signed agreement puts the brakes on any new truck routes in that area, and it would seem that a new bridge would need to be a truck route, especially for a Global Logistics Hub. Truck routes could get even more complicated when factoring in NorthPoint will need cooperation from Midewin National Tallgrass Prairie.

Then there’s the fact that NorthPoint still has to go through the same hearing process to formally annex and rezone the property because what they pulled off last spring was all just “pre” annexation. So, more time. A developer’s favorite thing to waste!

NorthPoint admitted they don’t own all the land, but they acquired more parcels recently, closing the deals just as the window for the pre-annexation contract to expire was closing, perhaps getting their fingers caught as it slammed down.

The developer would also still have to get the critical FAA property — a small two acre parcel that allows Joliet to jump kitty-corner to annex the rest of the NorthPoint footprint (which is debatable in and of itself whether that isn’t a bastardized version of strip annexation — making the project vulnerable to yet another lawsuit).

Behold! They have a letter of no objection! The funny thing left out of that press release is that the FAA property has to petition to be annexed, and they won’t do it. It’s going to require — you guessed it — court! And we all know how quickly the courts move, especially in a coronavirus world.

The FAA also issued a second letter clarifying the fact that they weren’t in support of the project — which is certainly how NorthPoint’s press release made it seem — and the FAA representative trusted that Joliet (and/or NorthPoint) would allow the letter to make its way out into the public. That never happened because they’re busy being ready, after all. 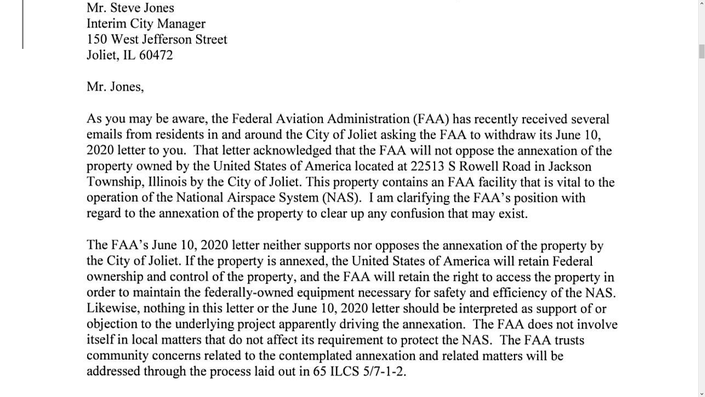 Speaking of court, the Open Meetings Act lawsuits are still in play, too. The Village of Elwood’s lawsuit over the pre-annexation agreement, separate from the lawsuit over the bridge, is also not due in court until fall 2020.

And really, with everything that Joliet has going on, appeasing NorthPoint should be the least of their concerns. But, priorities. Surely finding a city manager, dealing with the mayor’s investigation, and ongoing protests can take a backseat to NorthPoint. Opponents are building cases, everyone is watching, and the dog-pile has only just begun.

For a company that’s attempted to position themselves as leaders, NorthPoint has made a lot of mistakes and have been foiled by the tenacious adversity from a small town on more than one occasion. For a project that should’ve broken ground in 2017, NorthPoint Development is certainly burning up a whole lot of time — something that really doesn’t bode favorably for developments.

Who can forget the robocalls, the made up reporter Chris Harbison (where ya at, buddy?!), and this new Globopark announcement. What were attempts to accomplish something just ended up in uproarious laughter and quizzical looks wondering what on earth they’re thinking. Meanwhile, the development clock keeps ticking.

Speaking of problems, when NorthPoint went to Joliet to have a 103 acre parcel rezoned, residents cried foul that they were never going to do anything with it, and that it was just a means to an end. The zoning on that 103 acres recently reverted back to multi-family residential when the zoning expired because they never acquired the land. Looks like NorthPoint’s project is going to be all trucks without any manufacturing, after all. The poker game is up, and their cards are on the table for all to see. Honest as the day is long, that NorthPoint. The jig is up.

Then there are the promises of jobs. (Shh! No, we aren’t talking about the warehouse jobs where NorthPoint cannot and will not guarantee job quality, permanency, or wages.) It remains to be seen whether the promise of jobs that forged the best-friends-forever-relationship with the Will-Grundy Building Trades will be kept as the reality of the project moving forward drifts farther and farther away.

The deal still stands, though, and the bromance continues, despite NorthPoint’s history of failing to pay area standard wages, bringing in out-of-state contractors, and failing to abide by minority worker contracts. Oh, wait. Those are just lies, or misinformation, whichever suits your vernacular.

No one cares about the rats, fat cats, and “Shame On NorthPoint” cries filling the air when Doc Gregory is proclaiming that NorthPoint is going to put Thanksgiving turkeys on tables by getting his guys working (except in the case of the 103 acres that never got built, a project that he specifically said would bring turkeys, but no turkeys were had). It’s 1,600 jobs, and they mean it!

Well, maybe no one cares until people see that the most recent offense occurred in July 2020 (just this past week), where the International Brotherhood of Electrical Workers Local One made it clear that NorthPoint wasn’t paying what they promised. But surely, that won’t happen here. They can be trusted! Obviously, they always say what they’re going to do, always going beyond the contract, just like the 103 acres.

Originally appearing in The Patch on July 31, 2020