Evidence Points to Joliet Violating Elwood-Joliet Boundary Agreement; In Talks With NorthPoint Prior to 103-Acre Vote

Last fall, we found through a FOIA request that Mayor O’Dekirk had written an email dated October 28, 2019 claiming that the Mudron 5 had held secret meetings to bring in NorthPoint. Specifically, the email alleged that Bettye Gavin was in deep with the unions and would “do as she was told.”

The Joliet Herald-News picked the story up in November after the emailed surfaced and followed up with members of the Mudron 5 (a perceived faction/voting block of members of Joliet City Council  — Pat Mudron, Mike Turk, Sheri Reardon, Bettye Gavin, and Don “Duck” Dickinson) who vehemently denied that any part of the email was true. This was ahead of the vote for the 103 acre-project put forth by NorthPoint in Joliet. At that time, Joliet would NOT entertain any discussion about the larger project, despite the fact that it was glaringly apparent that the 103 acres was a nothing more than a foothold for NorthPoint (click to read more) to get to the rest of their project.

We argued that NorthPoint didn’t intend on building anything on that piece, at least not until long after they had secured and built the rest of the project’s footprint with Joliet. The primary reason for this thought process was that NorthPoint needed their bridge, which we still affirm to this day. Despite Joliet’s attempts to disconnect the 103 acres from the larger project, the reality remains that it was always connected — and no amount of protesting or proclaiming the contrary would make it true. Joliet passed the 103 acres.

The emails are below for your viewing pleasure:

Another Email Surfaces Accusing The Mudron 5 of Conspiracy

A recent FOIA request filed in early 2020 turned up more evidence that Joliet Mayor Bob O’Dekirk had attempted to spread rumors prior to that original October 2019 email. In August 2019, O’dekirk accused the Mudron 5 for having secret meetings with NorthPoint. Except this time, he offered corroboration of the rumors of the secret meetings with City Attorney Chris Regis.

What’s wild about all of this is that O’dekirk was insistent  that he had not seen the plan and had not met with NorthPoint. In fact, on October 1, 2019, O’dekirk went on Scott Slocum’s show on WJOL to proclaim he had not had any contact with NorthPoint and in fact said only staff had met with NorthPoint (listen to the interview at the 1:48 minute mark). At the same time, Mayor Doug Jenco is asking for a boundary agreement extension (again).

“I’ve never had a conversation with them.”

While this is all fine and well, what is further disturbing is that in the same FOIA request that a member of our group submitted, we discovered that Mayor Bob O’dekirk sent a letter in support of NorthPoint’s bridge over Route 53 on behalf of the entire City of Joliet with no discussion with Council.

Make no mistake: the bridge and the NorthPoint project are not separate efforts. The bridge is ONLY connected to NorthPoint. NorthPoint will not build the bridge without their park. The bridge has a sole purpose of connecting NorthPoint to the intermodal. It will do nothing to affect current traffic in the area. If built today without NorthPoint, the bridge would connect Centerpoint to farmfields and rural roads, some gravel, some single lane, some tar and chip. 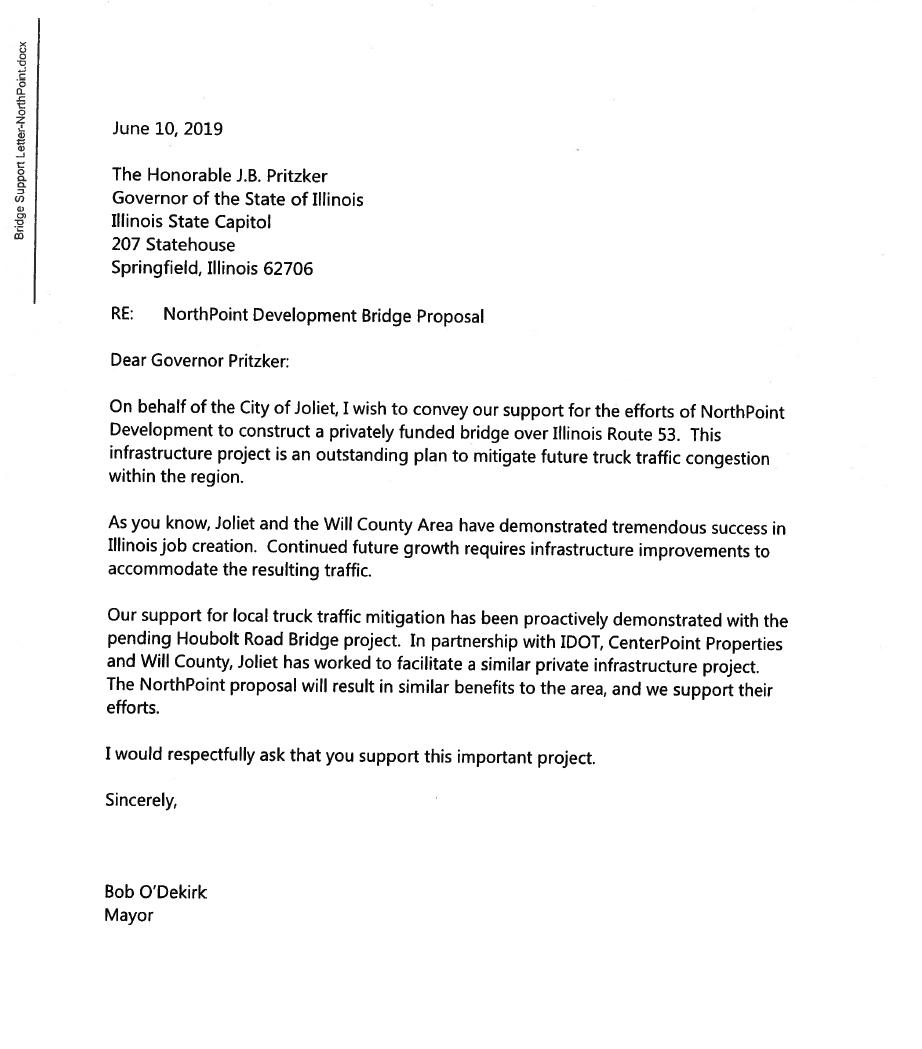 Below is the email that Steve Jones drafted regarding the letter of support for the bridge. Here, Jones acknowledges a discussion with Patrick Robinson of NorthPoint. The drafted letter was subsequently signed and sent to Governor Pritzker.

With the FOIA being in the public domain, the Herald-News picked up the story and reached out to Joliet for comment. What is particularly noteworthy about the interview is that it hinges on a a grandiose, self-serving misinformation piece. From the article, O’dekirk says:

Let’s be clear about one thing: NorthPoint has never proposed building the bridge over Route 53 without their project. It has always, and will continue to be, a critical component to their entire project’s master plan.  This bridge would only serve them and it would not alleviate current traffic congestion.  It is not an altruistic effort to help alleviate traffic. The bridge ONLY benefits NorthPoint by connecting the project to Centerpoint to provide access to the rail.

ONE PROBLEM: The County Application Did not Include The Bridge

No matter which way the cookie crumbles, this is not a good look for Joliet.

Keep in mind that all of this is occurring while the Village of Elwood is making repeated attempts to get Joliet to extend their boundary agreement.

I guess O’dekirk wasn’t banking on us remembering that that County Application did not include the bridge. You can still access all of the application materials on the Will County Land Use Public Portal. FURTHERMORE, you can read this August 2018 Joliet Herald-News article, which reported, with quotes from Scott Burnham for NorthPoint, that the bridge is no longer part of the plan. A noteworthy excerpt from the article is included below.

Gone from the plan is the proposed bridge over Route 53 that would have taken trucks off local roads on the way to nearby intermodal yards. “The village of Elwood didn’t want to vote on that proposal,” Burnham said. “So we are moving forward with an alternate plan on the land that we own.”

Here is a map of the proposal given to Will County. There is no bridge. You can see that they did not include the bridge in their concept plan. This was the empty threat that NorthPoint would build without the bridge. They never even finished submitting everything to Will County.

The Joliet-Elwood Boundary agreement was allowed to expire by Joliet at the end of December 2019, and to the best of our knowledge, there is no statute of limitations on a breach of contract. Time will tell what happens next.

The language of the boundary agreement indicates that not only would the municipalities need to work together for a project spanning the boundary line, but a municipality would have to “ACTIVELY OPPOSE” the project if they could not come to a mutual agreement. 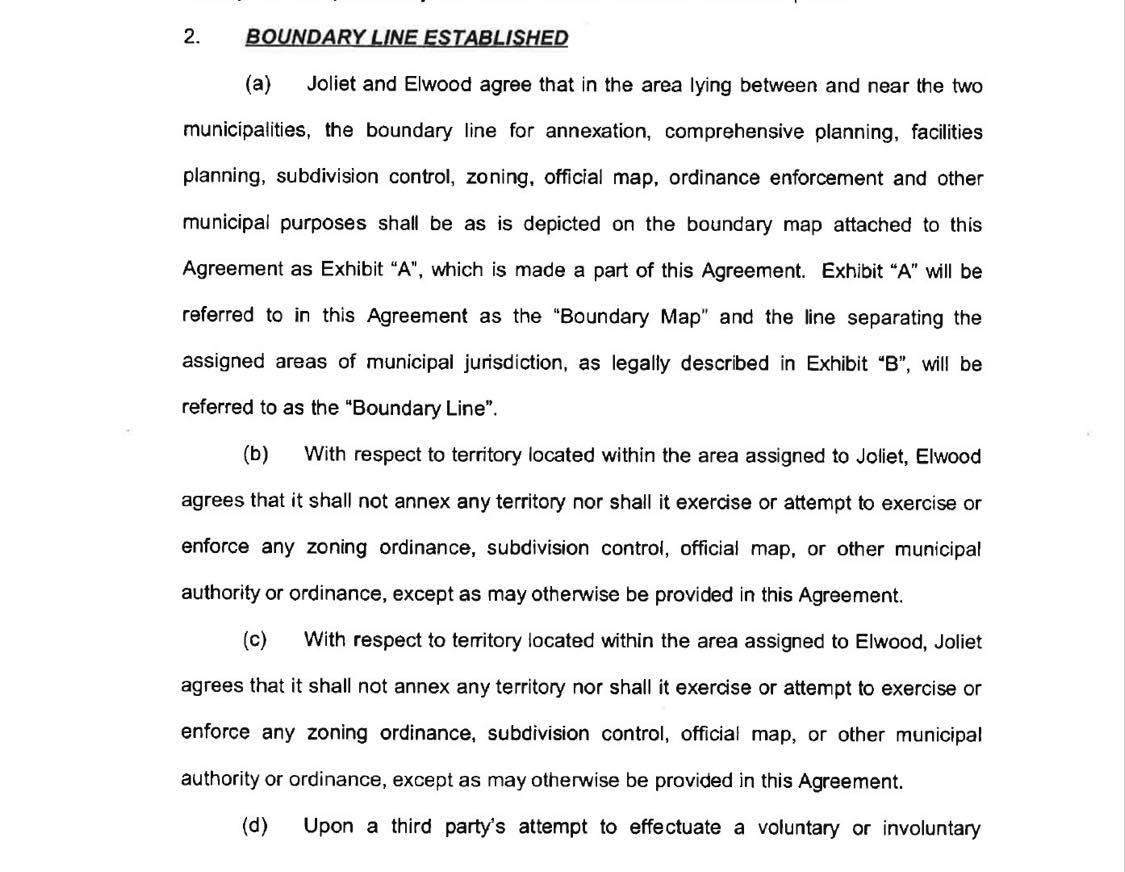 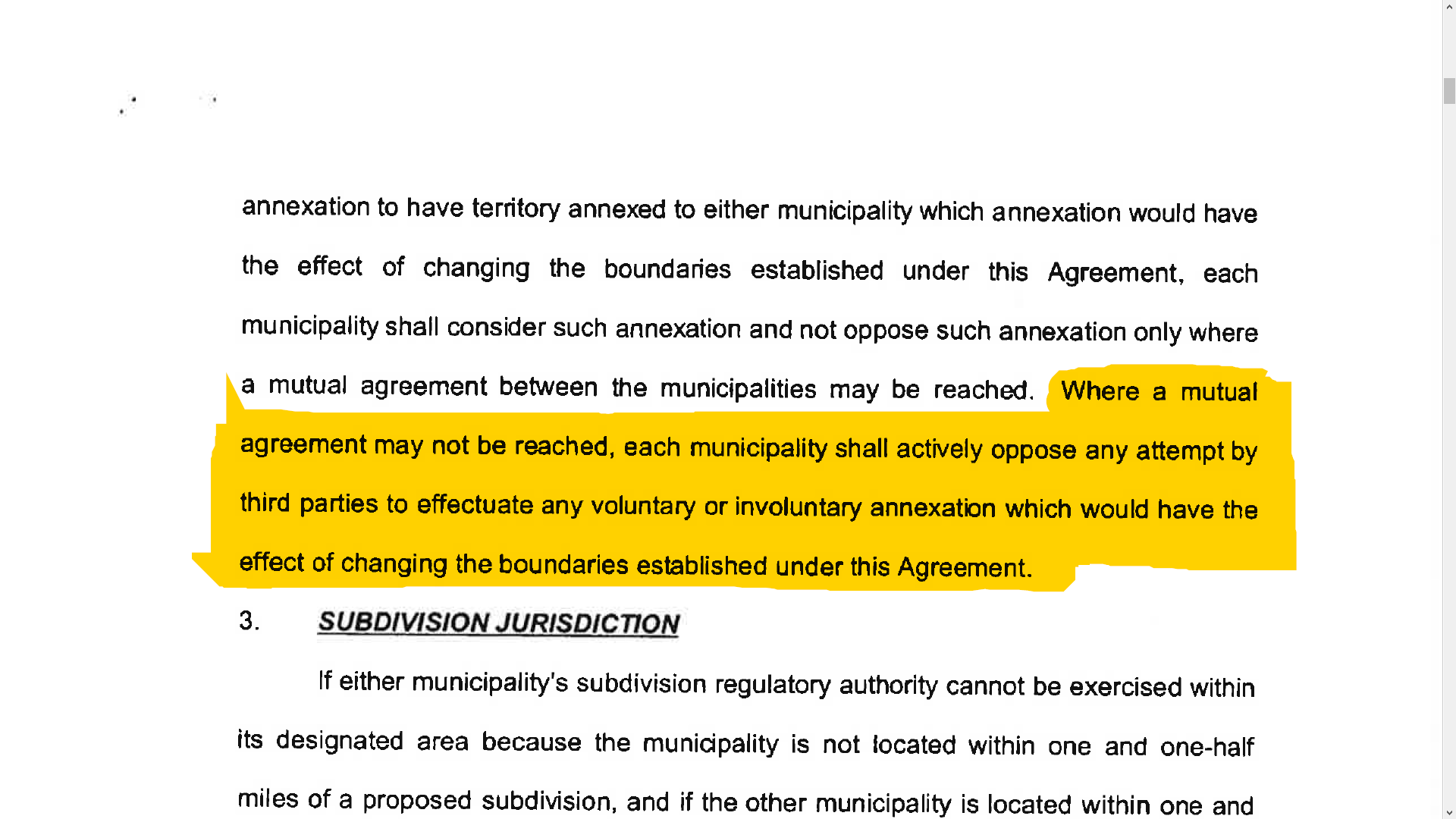 Wait and see. At the rate this soap opera is going, we’ll probably have another episode for you in the coming weeks. Until then, keep your calendars marked for March 17th, which is currently the proposed date of the vote before City Council.